Bagillt Hall Farm in Holywell in Flintshire is living proof that it is possible to run a successful family dairy farm, if you take the right steps. 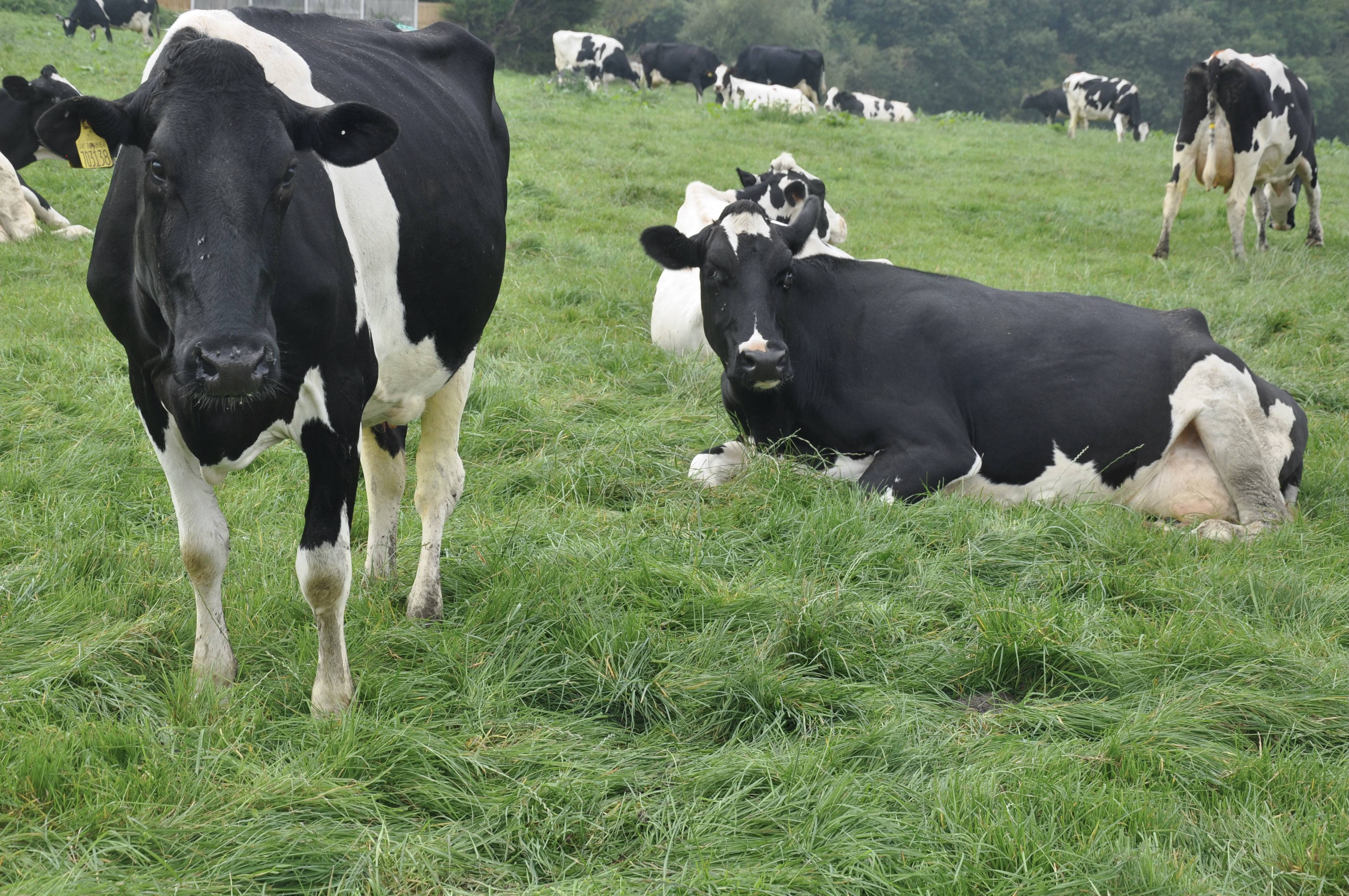 Run by Richard Corbett with his wife Penny and son Ed, the traditional farm, which looks out across the mouth of the River Dee to the Wirral beyond, is home to the “mainly pedigree” Abbot herd of Holstein Friesians, standing at 160 milking cows and 140 youngstock.

Milk is sold to the liquid market, with the year-round-calved herd currently averaging 8,500 litres per cow at 3.41% protein and over 4.0% butterfat.

The recent purchase of an extra 75 acres of neighbouring land has seen the area owned by the family increase to more than 200 acres, with a further 150 acres rented, and there are plans to increase to 200 milkers.

But as well as expansion to increase milk output, there is also a focus on improving efficiency – with targets of 3,000+ litres of milk from forage and raising milk yield per cow by an extra 500 litres. It is a process that has included changes to silage production and increased grassland re-seeding.

Richard explains: “We want as much milk from forage as possible. Britain is a great place to grow grass, and it is the cheapest source of feed. We re-seeded 50 acres this year with a long-term ley and will continue to re-seed. All the new land will be re-seeded by next year. 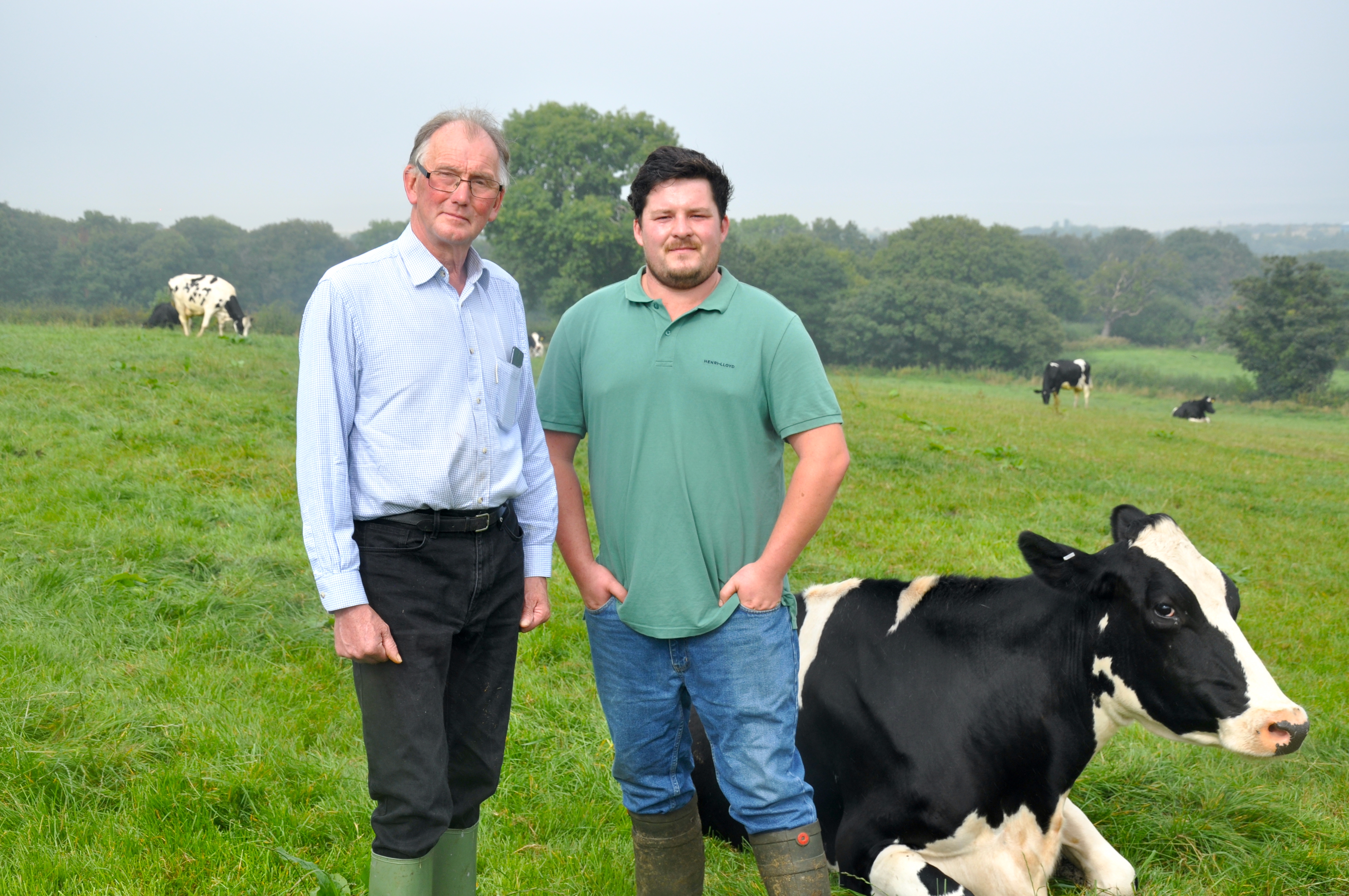 We bought the extra land to secure Ed’s future. This year we planted 52 acres of maize. The rest is down to grass.

As part of improving milk from forage, close attention is paid to silage operations. A trusted contractor is used to carry out the bulk of the machinery-based silaging tasks, with the Corbetts taking over from the point of clamp sheeting and sealing, including using side sheets for airtight clamp walls.

Richard says: “We have a good contractor, Dewi Mark Williams from Llangerynw, who does everything from cutting to clamp filling. He rolls it, we then put cling film on the top, followed by a strong top sheet, a woven blanket, tyres and netting to keep the crows off. We aim to ensile grass at 28% dry matter.”

Recent improvements have included the contractor spreading the grass immediately after cutting to improve wilting, and a new concrete-walled maize clamp has been constructed this season, rather than ensiling on the floor, with the aim of improving consolidation.

But a major step forward that Richard and Ed report has proven itself over the last three years has come from using bacterial silage additives containing the MTD/1 strain of Lactobacillus plantarum – in the form of Ecosyl on grass silage and Ecocool on maize.

This was in response to the family having previously experienced significant problems with heating in both grass and maize clamps, with the face going off at feed-out, plus problems with mycotoxins in the maize silage. Ed says: “It was almost like it was on fire.” Additives have always been used and various products tried over the years.

Initially trying the MTD/1-containing additive Ecosyl on grass silage, Richard and Ed say they could see immediately when the clamp was opened for summer buffer feeding that it had stayed cool.

This, in turn, prompted them to use the sister additive Ecocool on that year’s maize silage. As well as containing MTD/1 for improving fermentation, Ecocool contains a second bacterial strain, Lactobacillus buchneri PJB/1, specifically for tackling the yeasts and moulds that cause heating in higher dry matter silages such as maize.

Richard explains: “There were always problems with heating in the grass and the maize and the waste was unacceptable. You could see silage going off in the clamp before you could get from one side to the other, and the mycotoxins were making the cows’ legs swell.

When we went to Ecosyl we couldn’t believe the difference. We buffer feed and we saw the benefits immediately we opened the clamp. When we took the sheet off there was no waste.

“The health of the cows also rocketed because there was no mould. We used to have to use something against the mycotoxins. That was costing us £500 a year. So we have saved on that as well.

I can’t quantify it, but I think the milk yield also went up with Ecosyl.” With reduced waste, Richard says there is more quality silage available for the cows, and silage intakes have increased. Previously, he says there was always waste at the feed barrier, now the barrier is clean 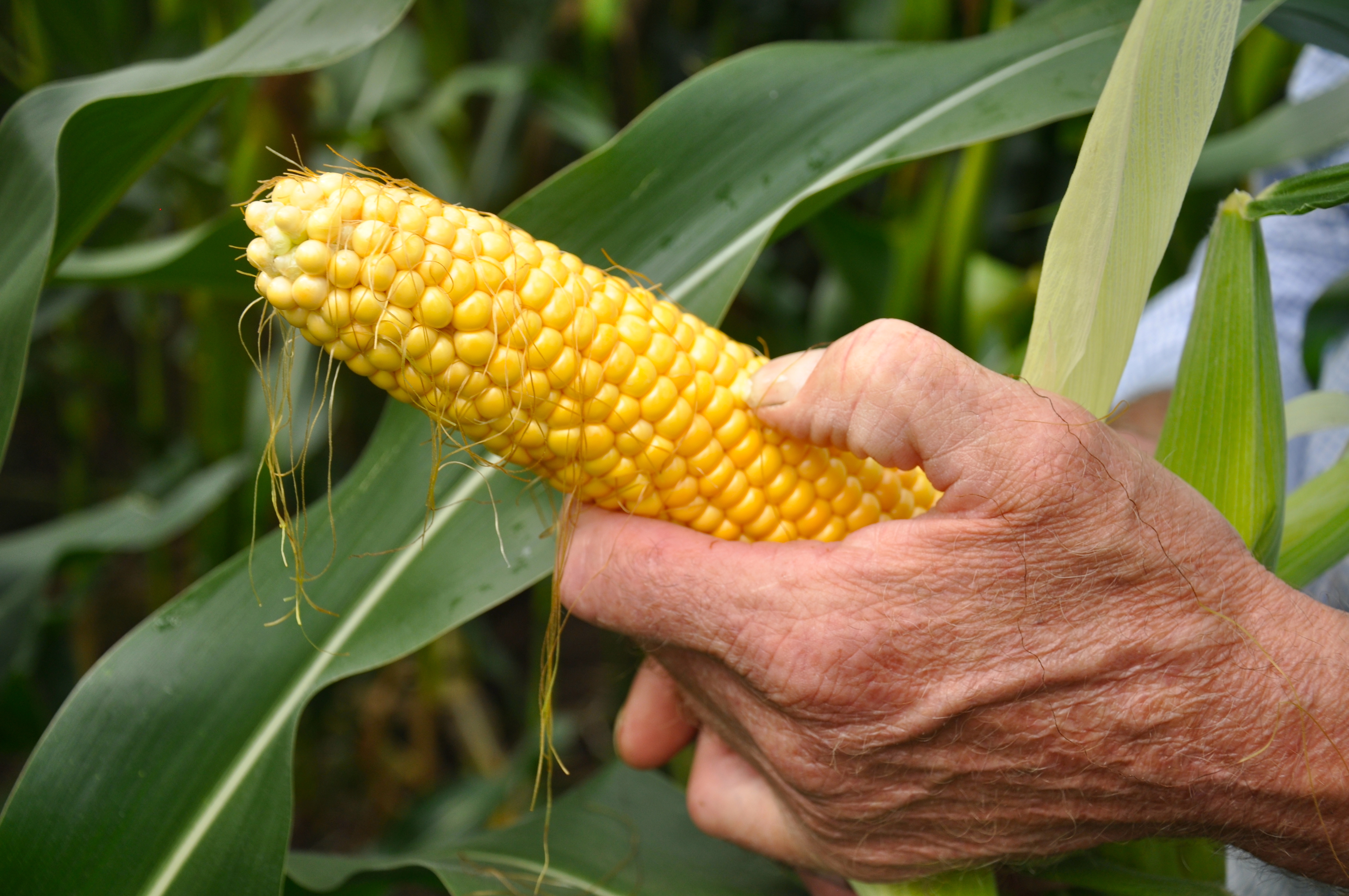 Three years on, and clamping about 1,000 tonnes of grass silage and 700 tonnes of maize, Ecosyl and Ecocool continue to be used.

Cows receive a mixed silage TMR comprising 70% grass and 30% maize, as well as a concentrate blend, some straw and water if required. A slightly higher proportion of grass silage is fed to lower yielding cows. “We are trying to get more protein into the low yielders,” Richard explains.

Another benefit that Richard and Ed see with Ecosyl and Ecocool is that the contractor applies them in ultra-low volumes of water. This avoids the time-consuming job of having to fill 200-litre barrels and carting these out to the contractor. Richard says: “We just mix with water in the 2-litre bottle and take it out to the field for him when needed. He normally keeps the bottles ready for use in the cab.”

As well as a milk yield increase from additive use, Richard says milk yield has also increased from re-seeding. Maize has also been a good crop this year. Having established this forage foundation, the family is now planning for future yields.

Richard says: “We want to get to 9,000 litres but no higher and continue to maximise milk from forage. We don’t want 10,000 litres because we don’t want to push cows too hard and get increased vet bills and reduced longevity. Using sexed semen and as many heifers of our own as possible, we also want to creep up to 200 cows.

In addition, there is a plan to add an extra income stream. “We want to get to the point where we have surplus heifers so we can sell a few,” Ed concludes

Rhodri Pritchard of Carr’s Billington Agriculture Ltd, who advises the family on forage preservation, believes additive use is increasing as more farmers are looking to improve milk from forage. 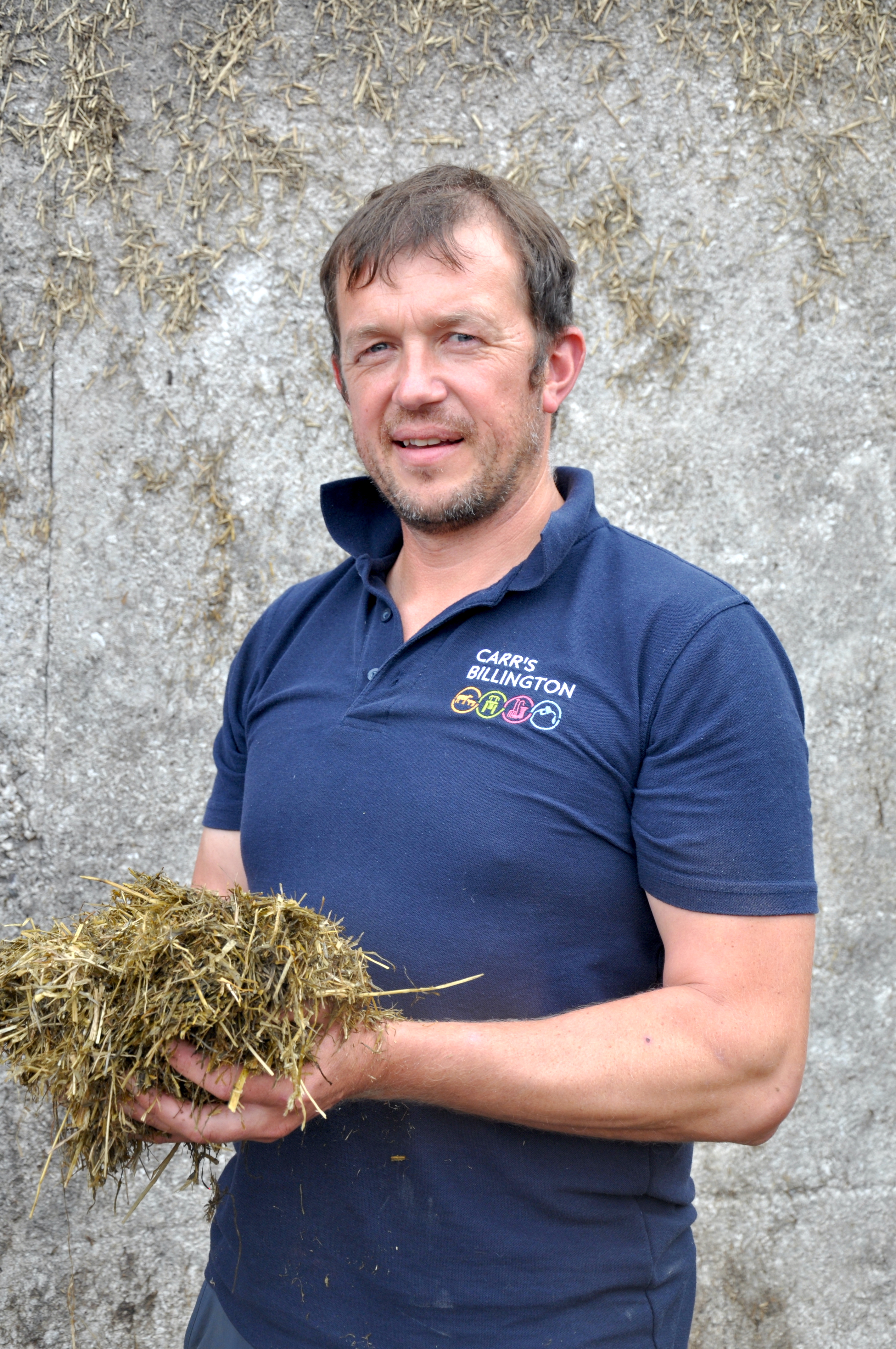 As well as preserving more dry matter, Rhodri says a proven additive such as Ecosyl can help preserve nutrient levels. Manufacturer Volac claims an average across a range of forages of an extra 1.2 litres of milk per cow per day from feeding silage preserved with Ecosyl, he explains.

Ecosyl is highly proven with multiple independent trials to back it up,” says Rhodri. “It is my go to additive. I’ve seen the additive promoting forage digestibility and greater intakes.

“As the additive is seen as so effective, it is commonly used on all cuts of grass. When Richard saw such a significant improvement in the grass clamp, he pretty quickly introduced Ecocool into the maize silage as well.