Fighting back against feed costs with better fermentation

With the grass in a silage clamp potentially worth tens of thousands of pounds, achieving a good fermentation to preserve it is critical. But how well do you understand the fermentation process? 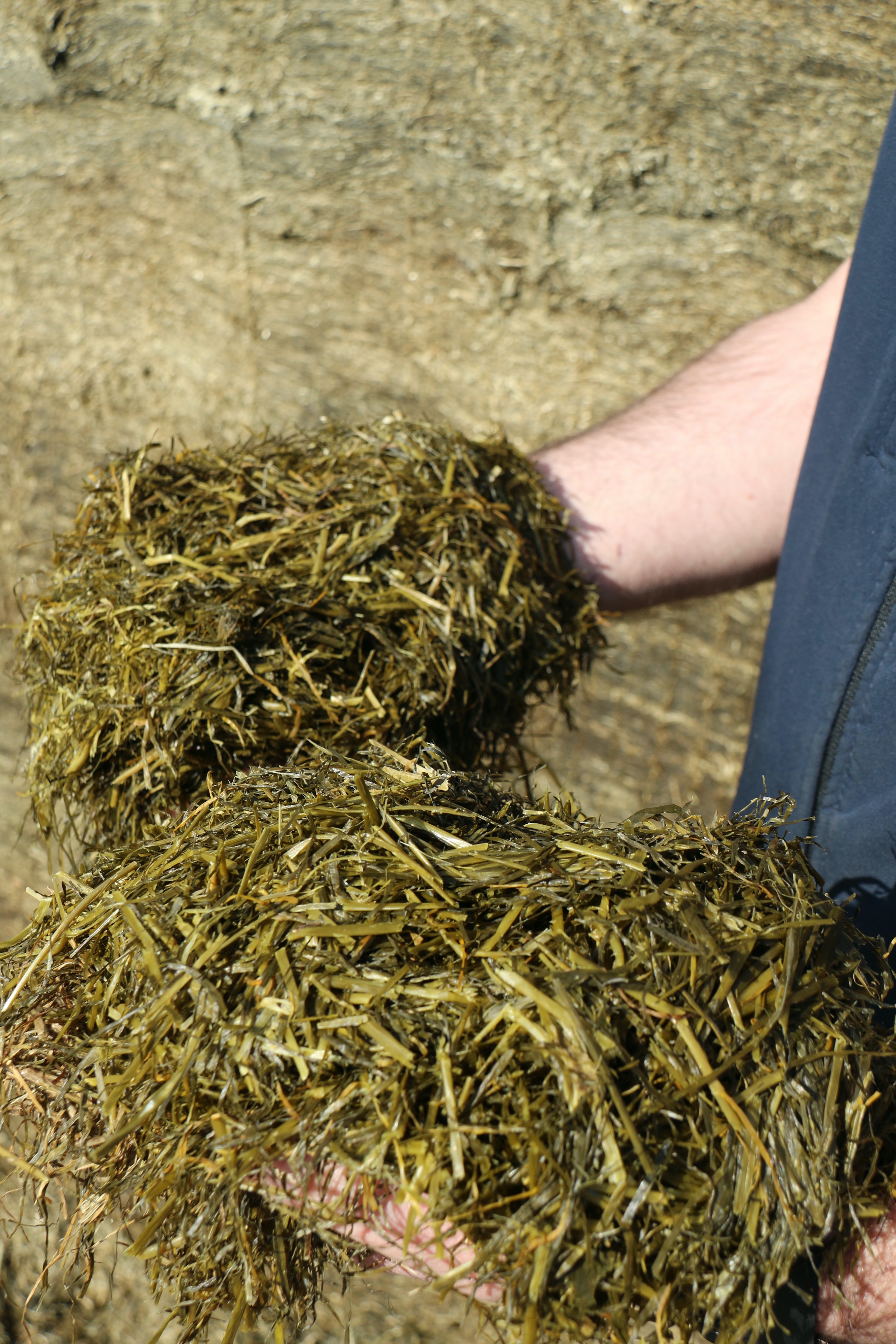 The grass in a typical silage clamp could be worth about £30,000, estimates Ecosyl silage expert, Jason Short.

Moreover, at higher feed prices, having good silage in the clamp becomes an even more valuable asset, he says, so it is well worth protecting its nutritional value from the outset – by ensuring it has a good fermentation.

When you think about it, fermentation is a key process that can underpin the profitability of a livestock farm for six months of the year or more,” says Mr Short. 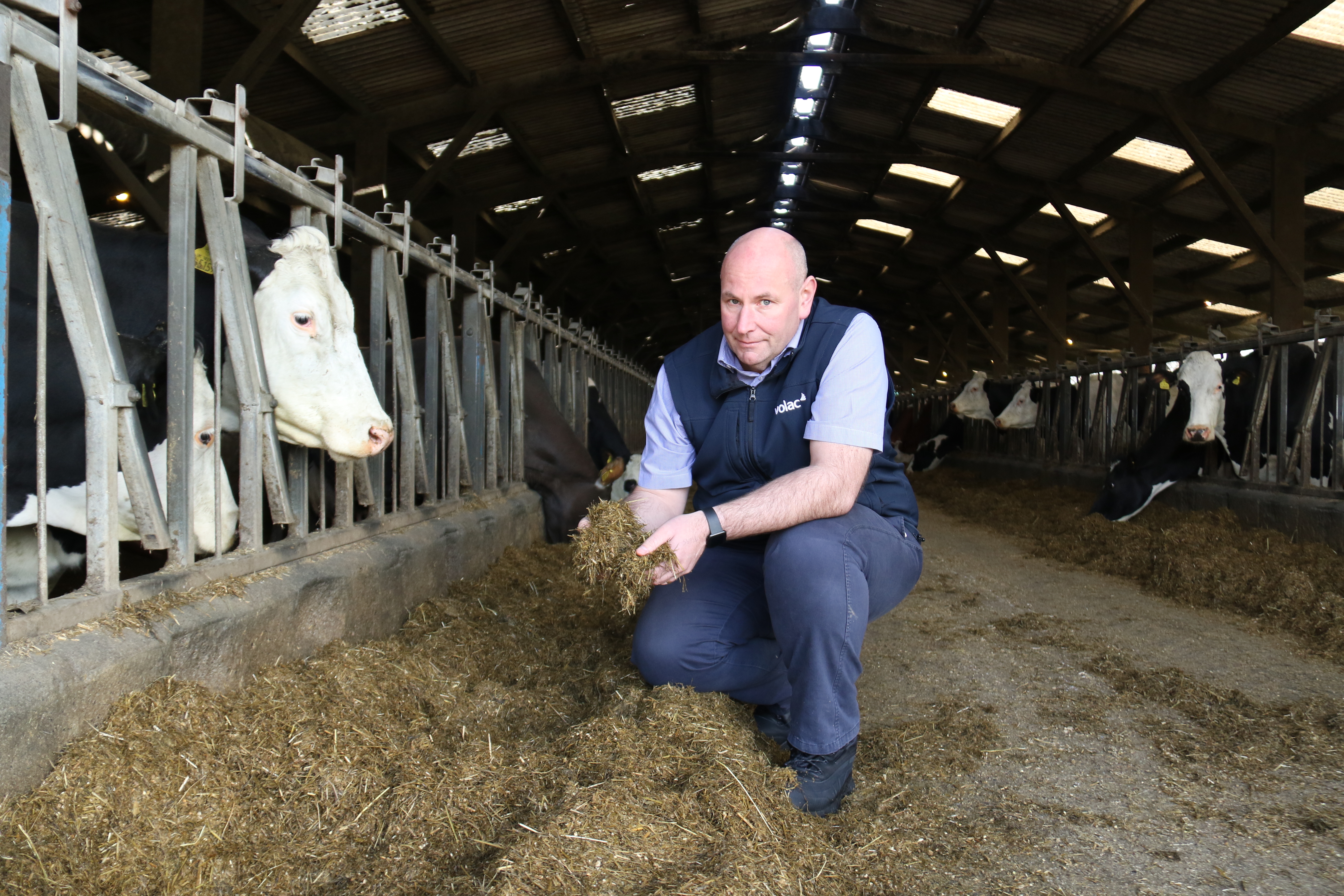 Exactly which type of fermentation occurs will be influenced by the steps taken during cutting, harvesting and ensiling and whether a quality additive is used, as well as how the grass was managed beforehand. If you have a working knowledge of fermentation, it’s easier to get these steps right.

In essence, Mr Short says fermentation is a natural process, in which some of the sugars in the grass are converted into acid by bacteria. In a good fermentation, a beneficial acid is produced, which in turn ‘pickles’ the grass and preserves it against the growth of undesirable microorganisms that would otherwise feed on its nutrients. However, in poorer fermentations, less desirable products are produced. 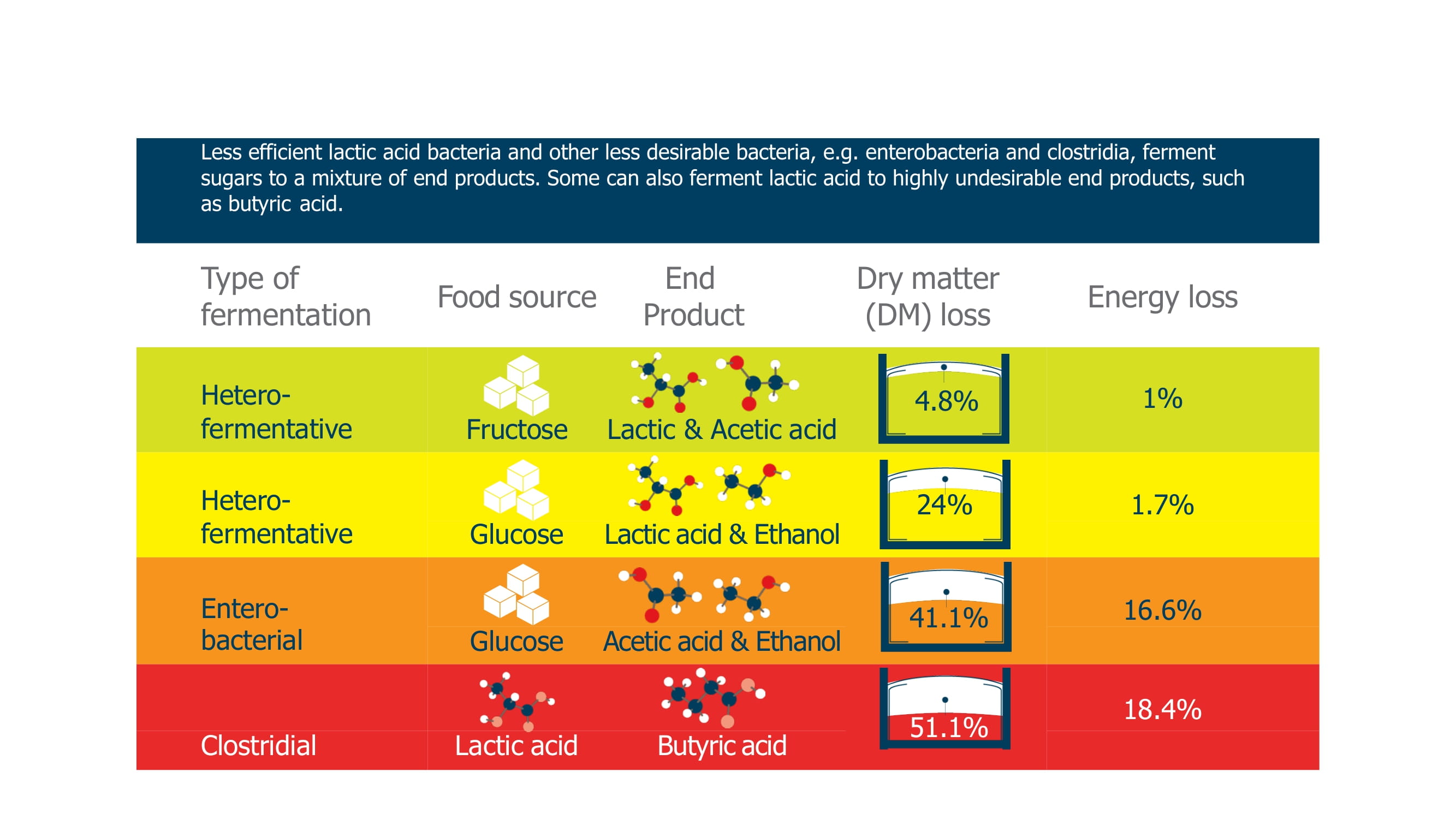 In a perfect fermentation, sugar is converted solely to lactic acid,” explains Mr Short. “This is ideal because lactic acid produces a very rapid ‘pickling’ effect through a rapid pH drop. In this way, the growth of undesirable microorganisms is quickly halted before they have chance to cause major nutrient losses. But there’s also another important benefit from this type of fermentation,” he stresses. 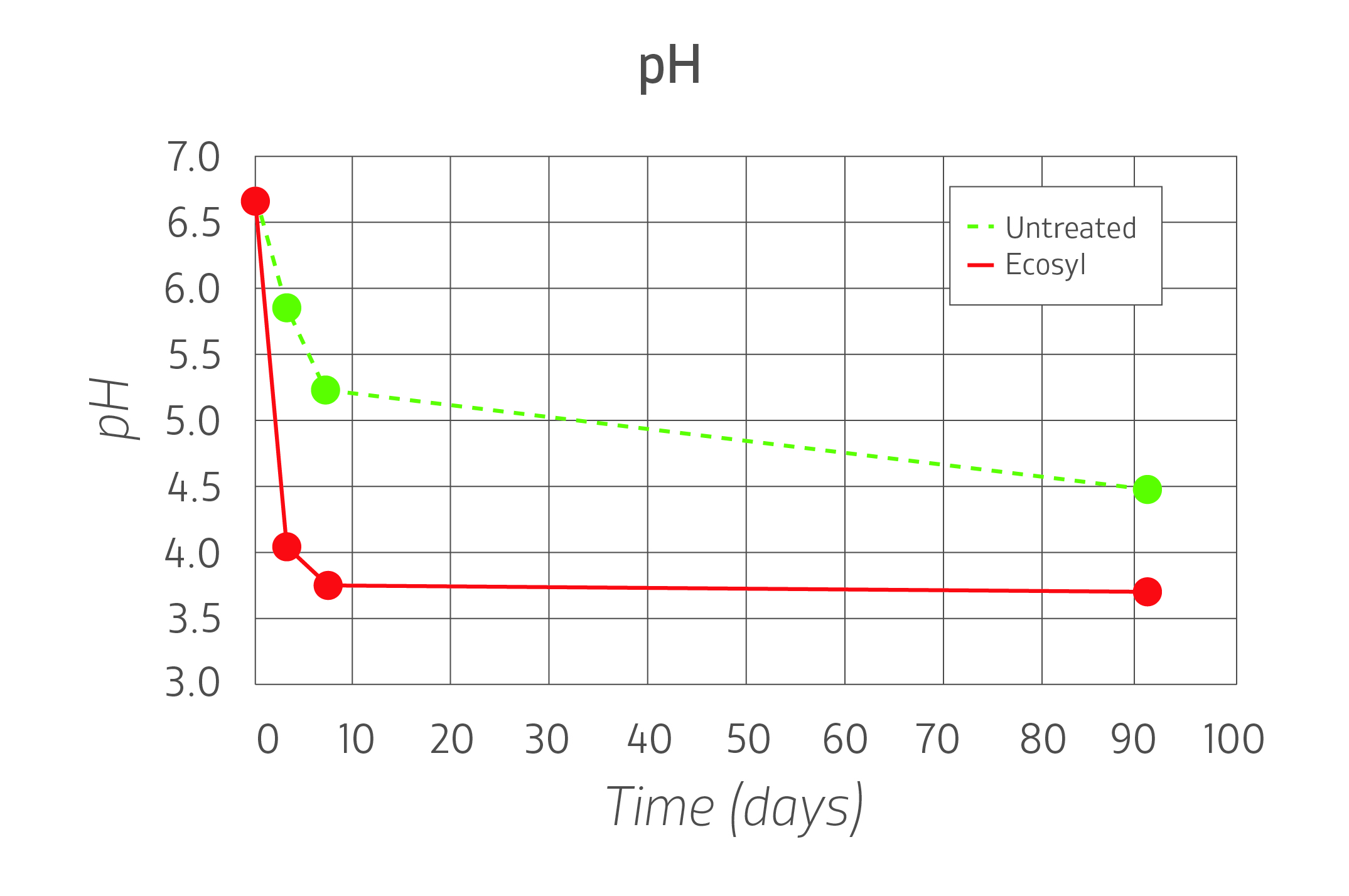 “Because no undesirable by-products are produced during the process, very little energy is wasted. Indeed, the lactic acid produced still contains over 99% of the energy of the original sugar. So it’s a highly efficient process.

“This type of fermentation occurs when a quality silage additive containing a high number of efficient lactic acid-producing bacteria is applied. It is called homofermentative because there is only one end product: lactic acid.” 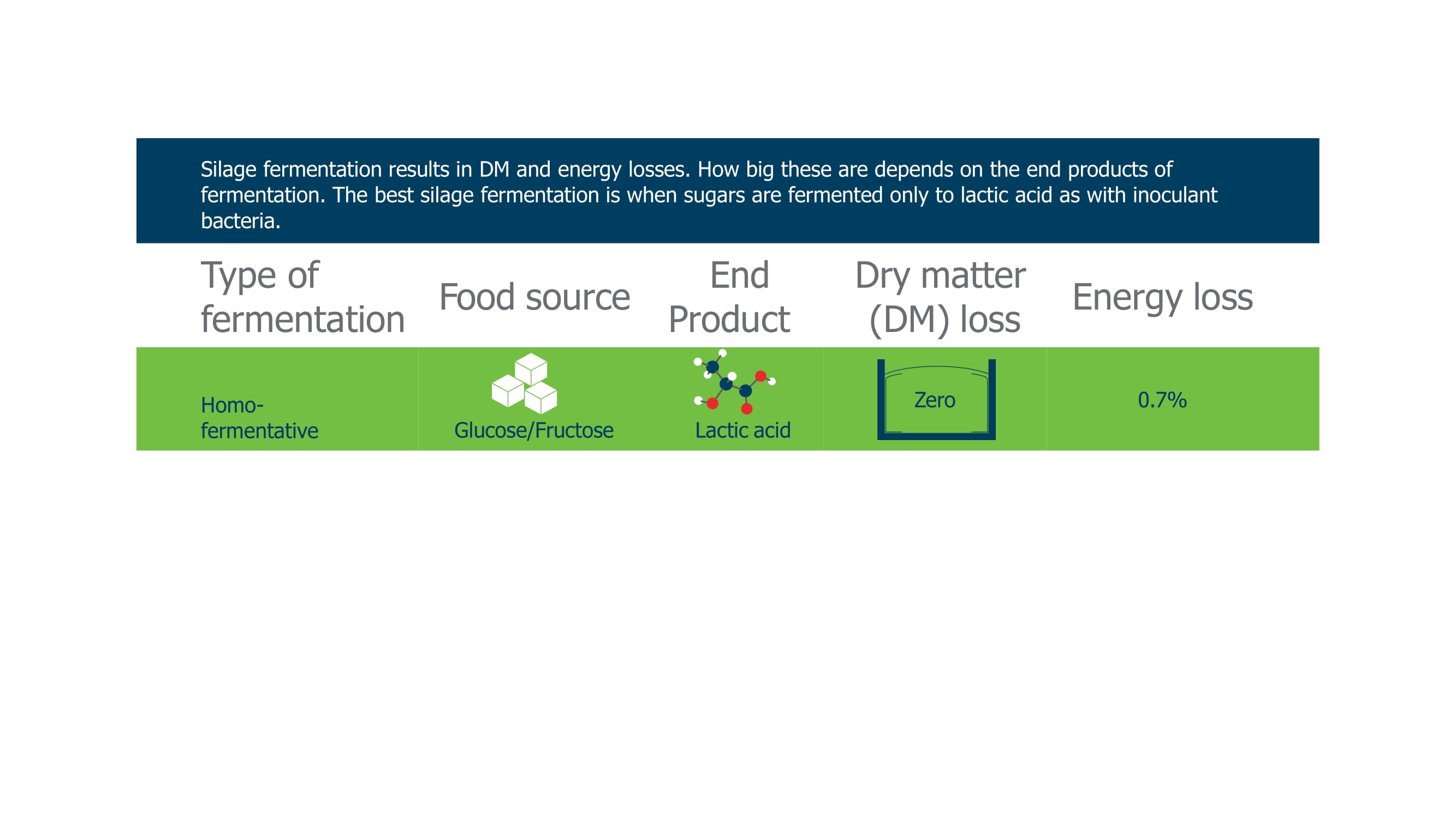 At the opposite end of the scale, Mr Short says poorer fermentations can occur for two reasons. Firstly, if they are carried out by bacteria naturally present on the grass that still produce lactic acid but do so less efficiently. Or secondly, if certain ‘bad’ bacteria are present on the grass.

“The issue with these bad bacteria is that they produce a range of less desirable end products besides lactic acid. This type of fermentation is termed heterofermentative.

These end products can include other acids called volatile fatty acids (VFAs). VFAs are weaker than lactic acid, which means the pickling process is slower and the pH may not fall as low, so undesirable microbes can continue feeding on the valuable nutrients in the silage for longer. On top of this, carbon dioxide is produced. This is particularly undesirable because carbon dioxide means lost dry matter. Another by-product of a poor fermentation is ethanol, which is not a preservation acid at all.

Mr Short says particularly poor fermentations occur if enterobacteria, the bacteria associated with slurry, are present on the grass and allowed to persist in the clamp, or if clostridia bacteria are present, which are introduced from soil. Worryingly, these can waste around 17 and 18% of the original energy content of the sugar, he points out.

“Clostridial fermentations are particularly undesirable because they convert beneficial lactic acid into much less desirable butyric acid, which makes silage unpalatable. So not only is the silage less nutritious, but livestock want to eat less of it,” he adds.

With all these types of fermentation possible, what can be done to maximise the chance of achieving the best one?

Clearly, avoiding slurry or soil contamination is crucial in order to minimise losses from these worst types of bacteria, says Mr Short. However, even if slurry and soil bacteria are minimised, and natural lactic acid-producing bacteria are present on the grass, these may only be present in low numbers and not necessarily the most efficient strains.

Maximising the sugar content in grass – for example by cutting at the optimum growth stage and achieving a rapid wilt – will aid the fermentation quality. As too will ensuring the clamp is well consolidated and airtight, restricting the growth of undesirable organisms. But another integral step is to also ensile with a proven additive that bombards the clamp with a high number of efficient lactic acid-producing bacteria.

“Research on the MTD/1 strain in Ecosyl has shown that it not only produces much faster pH falls than an untreated fermentation (e.g. fig 1) but also halves DM losses (e.g. fig 2) and conserves better nutritional quality – with improved energy content and true protein preservation over untreated silage recorded in trials. 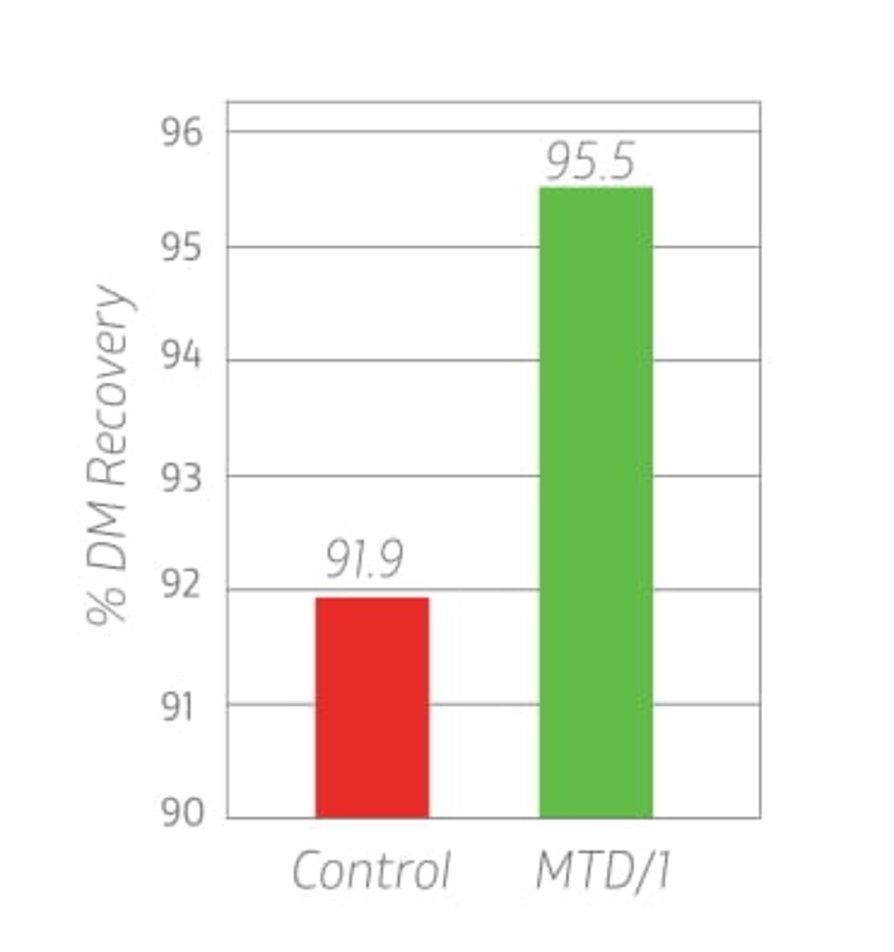 “Perhaps most important of all, results from 15 dairy feeding trials on a range of forages showed that silage preserved with MTD/1, as in Ecosyl, gave an average of an extra 1.2 litres of milk per cow per day.”

Find out more about the benefits of using Ecosyl.

Ready to start using Ecosyl? Head over to our online order form today.