Silage analysis is not a reliable indicator of animal performance as there are many other factors involved that are not determined. The only way to prove an additive can improve animal performance is do full scale feeding experiments and that is where Ecosyl stands head and shoulders above most other silage additives as there are now 33 independent animal trials behind it.

There have been 15 independent dairy trials worldwide on grass, lucerne and maize across a wide range of crops DMs (15-44%). Regression analysis shows that on average Ecosyl treatment resulted in a significant 1.2 litres extra per cow per day (Figure 1). 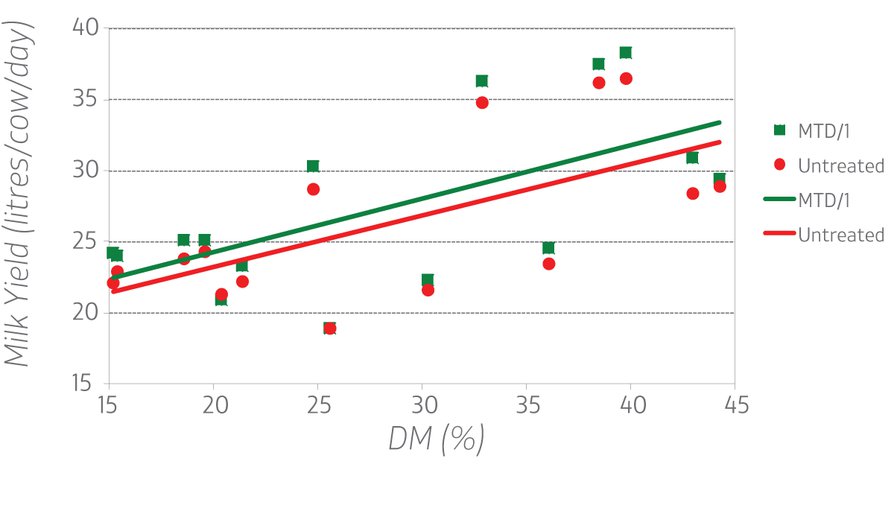 There were no significant differences in milk fat, protein or lactose concentrations but there was a trend to higher milk with Ecosyl treatment. The higher milk yield resulted in significantly higher outputs of all three components.

Consistent improvements in milk yield were seen across the whole DM range, from 15 to 44%, with the average being slightly higher (1.3 litres/cow/day) for the seven trials done above 30% DM.

In all except two of these trials there were only small differences in the fermentation analysis. In general, both treated and untreated silages had undergone good fermentations and any differences were of no nutritional significance. It is obvious that the positive benefits on milk production seen with Ecosyl are the result of something more than simply improved fermentation.

There have been a total of 19 beef trials with Ecosyl. Five of these were with growing cattle that were fed grass silage treated with Ecosyl. The results showed, on average, a significant 15.2% improvement in daily live weight gain and non-significant improvements in both silage DM intake and feed to gain ratio (Table 1).

A further five growing beef trials have been carried out with maize and lucerne silages, again showing significant improvements in liveweight gain (Table 2).

In nine trials where fattening cattle were fed grass silage, Ecosyl treatment led to a significant 9.1% improvement in daily carcass gain. There were also trends towards higher DM intake and feed to gain ratio, but these weren’t significant.

In 13 of the 19 trials, Ecosyl improved DM intake. In 8 of the 14 grass trials, in vivo digestibility was determined on the silage, Ecosyl increasing it by 3.8 units on average.

Bolsen (Kansas State University) compared the data from his two trials with Ecosyl with the results from all his beef/maize trials over a 10 year period. There were 12 trials in which a total of 11 different inoculants were tested. He found the improvement with Ecosyl was more than twice the average of all of the inoculants (Figure 2). If the Ecosyl results had been excluded from the results for all inoculants, the difference would have been even greater.